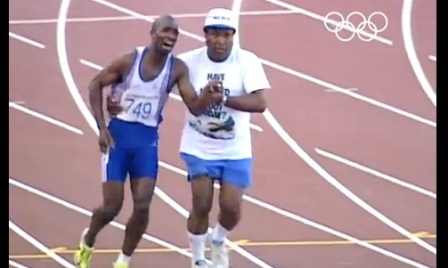 I recently had another opportunity to watch the 1992 Men’s Summer Olympic 400-meter sprint that took place in Barcelona, Spain. At the end of the clip, I got teary eyed just like the last time that I watched the video. This event reinforced in me the fact that if we don’t give up on our goals in life, we will eventually prevail. I got a new perspective this time around that we all have someone, just like Derek’s Dad that is ready to hold our hands and help us to rise again when we fall in the race of life.

Derek Redmond was favored to win the race, he has everything going for him. Everyone expected him to come out shinning, but as fate would have it, in just about 150 meters into the race, he had a torn hamstring. He suffered an excruciating pain that made it almost impossible for him to go on with the race. Many people, in such a situation, will give up and stop because of the pain, but not Derek. He persevered and he kept limping along. He was there to run the race, and he was not about to let some pain stopped him without achieving his goal. His father who was watching from the sideline suddenly broke through the security to come to his son’s aid and help him to complete the race. He provided a shoulder for Derek to lean on so that the race would be a little easier.

Here are 3 lessons to be learned from this event:

In conclusion, challenges will always be on the way to every worthwhile ambition. Do not give up when you encounter an obstacle on your path, rather you should persevere, strategize along the way, keep your hope up and alive, maintain your faith in God, and you will become a winner. Keep winning!